When you need to pass a weed test, you find yourself asking several questions such as “does niacin flush free work to pass a drug test?” “how many niacin pills to take to pass drug tests”, and “directions for getting niacin products near me”

These are some of the regular questions people ask, indicating that they want to learn more about niacin pills and how they can effectively help with passing a weed test on short notice.

When Hugo Weidel was examining nicotine in 1873, he came across niacin, and that was the first time the compound was documented. Niacin, also called vitamin B3, is a hydrophilic compound that comes with pyridine.

Niacin, like other B vitamins, contributes greatly to breaking down fats quickly. When it breaks down fats, it reduces the cholesterol level the liver releases by up to 20%, which makes for good health. Whether you’re trying to pass a urine drug test or pass a saliva test, niacin adherents say you stand a chance with this compound.

Many people wonder what niacin pills are used for. The concept of niacin flush came from the idea that the compound effectively flushes the system of any substance, particularly weed. Several claims abound on the internet on the role niacin plays in flushing weed, cannabis, and marijuana from the system.

Reports on the internet attest that you stand a high chance of passing your weed test when you take a mega-dose of niacin supplements. But how fast can niacin clean your system?

Most people revert to quick methods like this because drug tests come unannounced. As such, when your employer requests you to get a test, you will need a way to navigate the test quickly and efficiently. While there is scanty evidence on the procedure’s efficacy, we shall consider the common ways it’s used.

Weed Detox: How Niacin Works on Your System

Niacin users claim that the compound is effective for weed detox, and niacin detox stays an efficient practice. However, to make the most of the procedure, there’s a need to follow certain steps to ensure the system truly benefits from the compound.

User stops the drug use: While niacin supplements may contribute to erasing the weed elements in your system, there’s a primary need to stop using the substance once you learn of your pending drug test.

If the compound is going to work, it’s not guaranteed that it can cover all weed elements in your system, especially if you continue to use the substance. Users of niacin for this purpose say that the user must have stopped taking weed at least three days before the test.

Niacin supplements: once you discontinue the substance use, the next thing is to get the niacin supplement. There are two formats to using niacin, whether slow or immediate release. Most users claim that they have recorded more success using the slow-release version. Notably, flushing is often one of the adverse effects of using this procedure. You may be curious about how long does niacin flush last.

Also, you may want to consider the particular dose of niacin flush pill that will be most effective. Many people ask, “how much niacin should I take to pass a drug test?” The truth is there’s no consensus on the dosage to use. Some individuals claim they have had effective results from using up to 2500 mg niacin per day.

Simultaneously, some others have reported success using doses as low as 250 mg or 500mg per day. You should know that the recommended daily allowance (RDA) of niacin has falls between 14mg and 18mg. This means that those who use niacin for passing weed tests are using over 178 folds.

It is advisable to spread the doses across the day. This can be divided into 3 to 5 times, especially if using immediate-release niacin. When niacin is divided into a set of doses, the body can handle it better, and you can save yourself from intense adverse reactions.

Drink water: When you use niacin for weed tests, it is necessary to drink lots of water. Users of this method advise that you drink as much as 2 gallons of water. Remember that the average recommended amount of water regularly is 13 cups of water, which is about 0.81 gallons. That is, with niacin, you are drinking more than double of that.

The essence of this high-water volume is so that you can excrete the THC in your system before the due date. The niacin effect works to clean your system of THC while the water pushes the weed elements out.

Are There Any Health Risks of Using Niacin Pills?

While niacin flush pill may be effective in passing a drug test, understand that it takes a high dosage for the compound to perform that flushing task. This high dosage you consume may have some adverse effects.

These instances may be aggravated if you have some existing medical conditions.

If you also constantly use the procedure to pass your weed test, the complications may become more difficult. More issues may arise with niacin usage once the user becomes toxic. Elsworth Anderson reported a case where a boy suffered acute hepatic failure owing to niacin toxicity.

Also, you should understand that hospitals are increasingly becoming more aware of methods to pass drug tests. As such, overusing niacin might make the compound detectable in your system, which will give the idea that you attempted flushing your system.

Many people have used this product for detoxification purposes, among other purposes it serves. Here are some useful reviews for you: 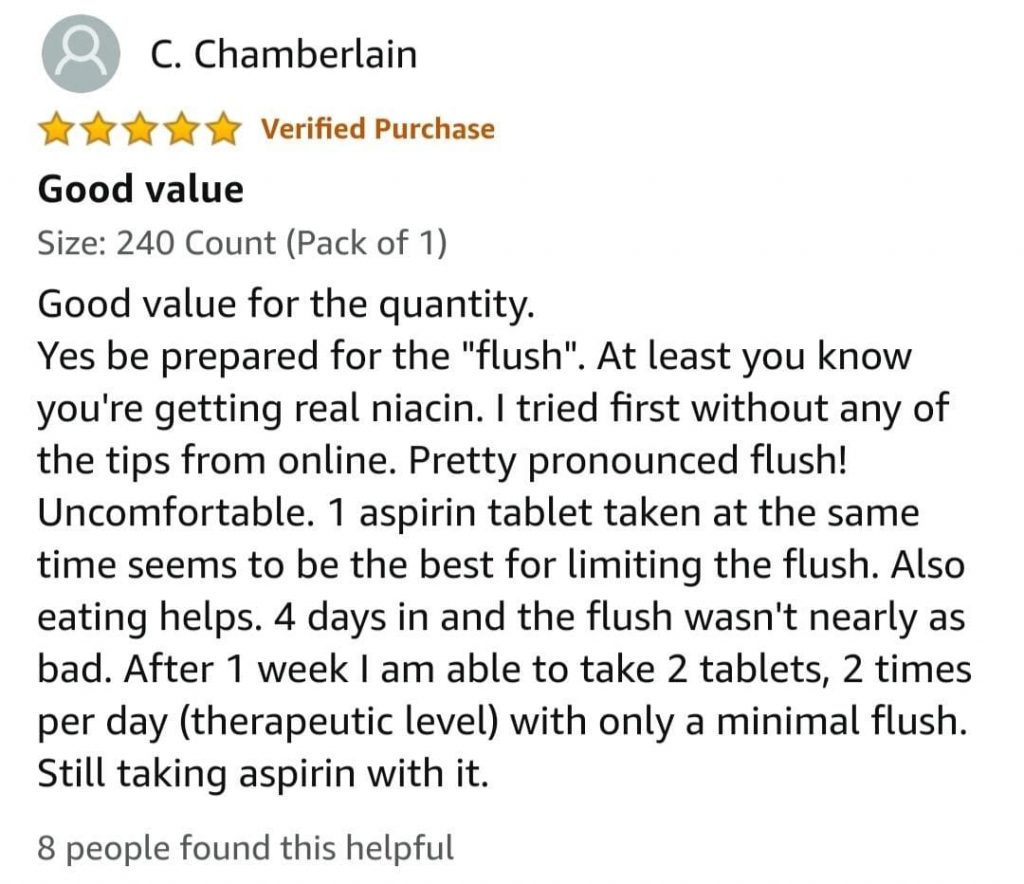 The chances are high that you’ll get the flushing effect. That’s essentially how the niacin product will perform the job if it will. 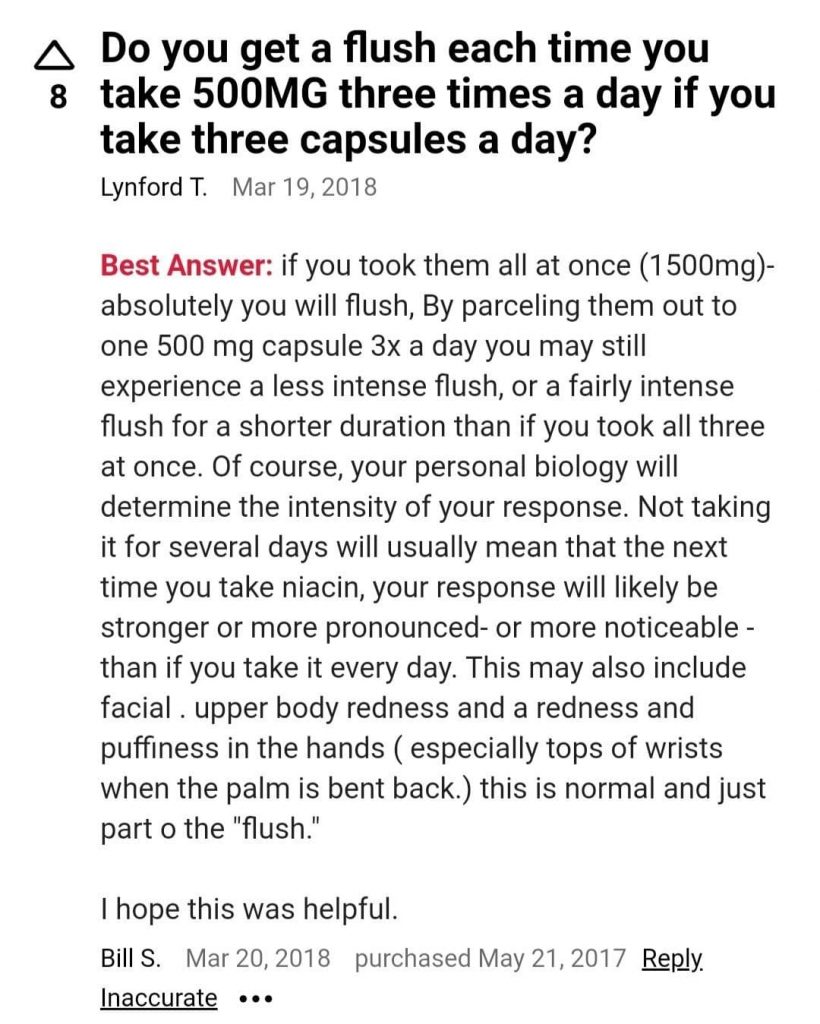 The flushing effect often comes with some side effects such as redness and puffy hands. 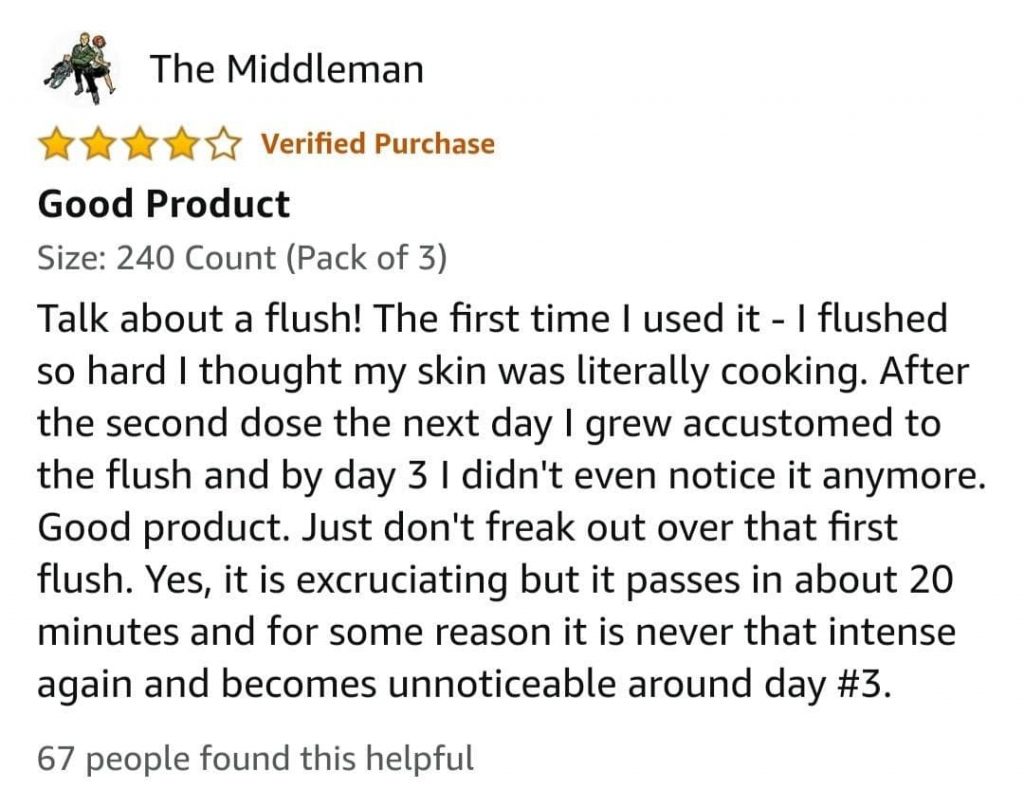 It may work, but prepare for some excruciating effects. 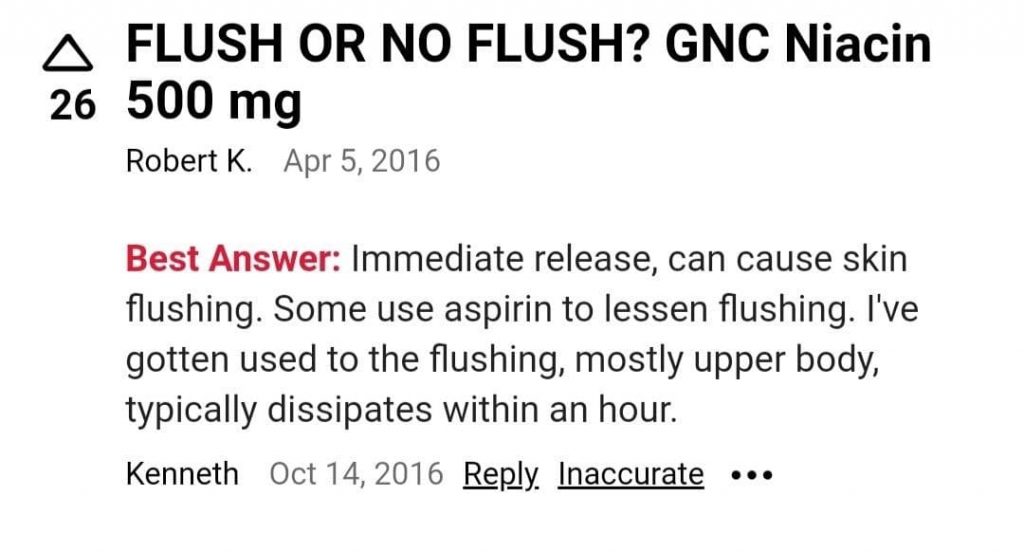 The user says it can cause skin flushing, which is one of the adverse effects of niacin.

Some users claim that niacin may not do much good unless you’re getting a hair test.

Unless they decide to do a hair test, niacin or anything else is not going to do you any good at all. They can detect drugs for a month or longer, even up to six months. Hair tests are becoming more popular for testing drugs since it has become cheaper now to test, around $35. — by Herschey

Using niacin for passing drug tests has been a trending topic. Suppose you need a quick fix to pass a weed test, niacin adherents say the compound works in doing that effectively. However, understand that this isn’t a guarantee that it will work for you.

While some people use lower dosages and they claim it works, some have to use higher dosages. You may not have the time to determine which will be effective for you. Yet, excessive dosages of the compound tend to have side effects. So, you need to be careful about using this product to pass your weed test.

Related articles
Detox 0
If you are coming online to search Ultra THC Magic Detox reviews, then you
Detox 0
Does aspirin work to pass a drug test? This is a question many people
Detox 0
Many people consider Jazz Total Detox Drink reviews because the product manufacturers say that
Detox 0
Hair follicle testing recognizes the presence of liquor, nicotine, cocaine, cannabis, methamphetamine, sedatives, and
Detox 0
If a drug test as a requirement of the company is coming soon, and
Detox 0
A B C D E F G H I J K L M N
Recent Posts